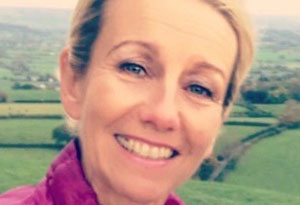 The grief-stricken mum-of-two from Landsdown West, Bath, spent months crying herself to sleep after Sue Daw died, aged 74. (from Taunton. She was cared for at St Margaret’s Hospice, where she spent her final days).

But then she tried a revolutionary chiropractic treatment, which eased her emotional as well as physical pain.

Ali, a founding member of Pet 24, which provides ID tags to track pets should they go missing, said: “My mum was diagnosed with terminal cancer and given about a year to live. It was devastating for the whole family. But we made the most of everyday and celebrated our time together.

Due to the hands-on care Mum needed (and I was happy to give) I started to get severe back ache, but never had the time to deal with it properly.
“I was very close to my mum and nothing could prepare me for the day she finally passed away. I spent months crying most nights.”

Ali, who has provided training sessions to a number of corporations, said: “I had tried to keep myself busy as a way to deal with the grief, but there were times I felt I couldn’t cope.

“Like anyone losing a parent, I felt a desperate sense of loss. My physical pain got worse too, and I had terrible upper back pain.”

She then decided to try a hands-on therapy, called Network Spinal Analysis (NSA), after meeting practitioner Dr Thomasina Craster at a networking event.

The treatment uses light pressure on specific points of the spine to ease tensions caused from injury, mental or emotional stress.

Ali, who fronts the Bath and Bristol reggae band Giant Sequoia, said: “Thomasina's one finger felt like a red hot poker, which would release the pain.

“There’s something about Thomasina and her practise, which isn’t just about the physical treatment, but emotional healing. It helps you to stay in the moment and cope better in the future.

“I felt a great release and afterwards would walk down the road thinking everything is going to be OK.”

Ali, who has worked as a teacher in [Bristol, London and Devon], added: “I don’t know exactly what Dr Thomasina did to this day. I feel emotionally strengthened after a session and ready for anything.”

Dr Thomasina said: “The treatment helps release tension caused by trauma and shock, which could be the result of a sudden loss or accident. This release helps ease the feeling of being overwhelmed.
“It helps people come to terms with their grief and cope better – enabling them to get on with their lives.”

Ali, a mum of two from Landsdown West, Bath, said: “There’s something about Thomasina, which isn’t just about the physical treatment, but emotional healing. It helps you to stay in the moment.”