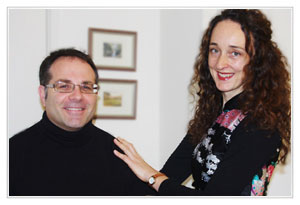 BLIND drummer Adam Nicholas feared he would have to quit his band because a frozen shoulder left him in severe pain when he played.

The 40-year-old from The Burgers band [based in Bradford on Avon] also had restricted movement and would roll around on the floor in agony after each performance.

But then he tried a revolutionary chiropractic treatment, called Network Spinal Analysis (NSA), and became pain-free and mobile again.

Adam, from Specklemead, Paulton, said: “I have to face challenges most days because I’m blind, such as moving around, and it can be emasculating. But when I play the drums I feel in control and it’s a great feeling.

“But I started to suffer from excruciating pain and drumming would aggravate it all the more. It was sometimes like having a knife in the back of the neck and shoulder.

“I’ve been gigging since the age of 15 and music is my life. I thought I would have to give it up, which would have been devastating.”

Adam, who is a counsellor with Off the Record in Midsomer Norton, was diagnosed with retinitis pigmentosa (RP) at the age of nine, which is a hereditary eye disease. His eye sight steadily deteriorated and he was registered blind six years later.

But with his blindness, Adam, who also works for Reflections in Bristol to help other people deal with sight loss, developed an even greater love for music.

But he developed shoulder problems because he was constantly tense – fearing he would bump into things. For years he suffered with pain, weakness, numbness and cramp caused by his condition.

It was recommended he try NSA with chiropractic practitioner Dr Thomasina Craster.

The treatment uses light pressure on specific points of the spine to ease tensions caused from injury, mental or emotional stress.
Adam visited Dr Craster at her Abundant Life clinic in the Bath Practice in Monmouth Street, Bath, and after a dozen sessions felt a marked improvement.

The former Midsomer Norton School pupil, said: “If I didn’t have treatment I think I would have lost the mobility in my arm and been unable to play the drums.

“She helped me all round and didn’t just ease my back ache. My whole body feels better and it was like having a health MOT. I also feel much more connected to myself and the world.

“I feel much better physically and emotionally. She helped to make me pain free. I feel more comfortable and relaxed, which has had an effect on my performance.”

The treatment can also help people deal with grief.